Department of Veterinary and Animal Sciences 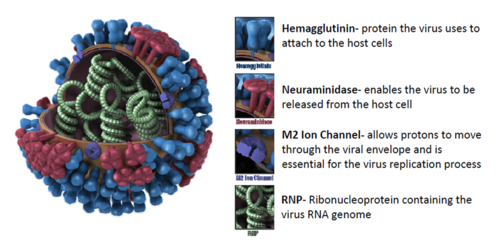 Influenza A virus (IAV) is an important pathogen in humans and animals and has zoonotic potential2. Historically, devastating influenza pandemics have killed millions of people3. Infections of humans with avian influenza A virus are relatively rare but has a case-fatality rate above 50%1. A major barrier to human infection by the avian virus is differences in receptor binding preference, but a comprehensive list of other factors have been published4. Furthermore, different host factors including age, gender, and expression of IFN-induced genes have been shown to influence the susceptibility5.

Pigs are regarded as a melting pot for generation of new IAV variants with changed virulence and host range2. Nevertheless, there is a lack of knowledge of viral genetic markers of both virulence and host range barriers of swine influenza A viruses (swIAV), even though the fact that the most recent pandemic in 2009 was caused by an IAV of swine origin6. Furthermore, there is substantial documentation for frequent transmission of swIAV to humans and vice versa7. Since the receptor binding preference of human and swIAV are similar8,9, the mechanism behind zoonotic potential and transmission must depend on other viral and/or host factors2,10,11,12.

Half of the diagnostic submissions from Danish swine are positive for IAV13. The majority of the isolates are swine specific swIAV, whereas viruses derived from the recent pandemic in humans (H1N1pdm09) constitute 25% of the positive samples. The last 10% of the viruses represent variants including re-assortments that have acquired human seasonal influenza virus genes14,15. In total, 18 different variants are presently circulating in Danish swine16. The frequent occurrence of genes originating from seasonal human influenza strains in Danish pigs indicates an ongoing spillover of influenza virus from humans and show that these viruses mix with enzootic swIAV creating new reassortant viruses with potential zoonotic capabilities. Denmark produces more than 30 million pigs yearly and thousands of people are in daily close contact with them, making Denmark a potential hotspot for creation of new influenza viruses and provides a perfect setting for the study of the exchange of viruses.

Thus, more knowledge about the molecular determinants of both virus and host, that restrict the host range of new influenza A virus strains, is urgently needed